A nation cannot appreciate what it has no knowledge of.

The history of America and its culture has too often been written down with a focus primarily on white males and their contributions and experiences. African Americans have traditionally been either lightly touched on or, in a lot of cases, left out altogether. As we move forward in the 21st  century, we must demand a fair and equitable America in all aspects.  History is important and has a real role to play in the events currently unfolding.  By understanding the realities of slave ownership, for example, we get a clearer picture of the racist systems that grew out of it.  By highlighting the contributions of black men and women—from civil rights activists Thurgood Marshall and Sarah L. Keys, to poets and writers like Langston Hughes and Richard Wright, to the all-African American women’s 6888th Central Postal Directory Battalion that served overseas in WWII or NASA astronaut Mae C. Jemison—we appreciate the importance of a society that doesn’t squander the talents of any race. 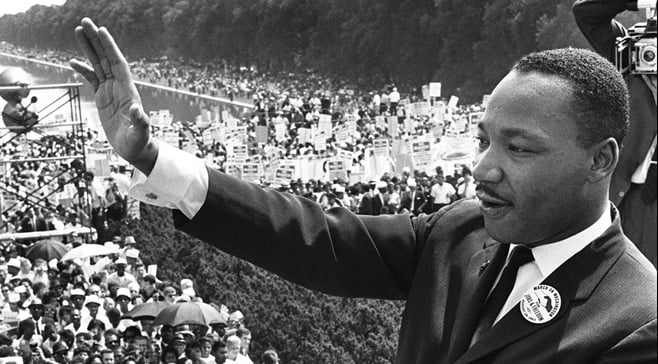 The Dream Lives On... 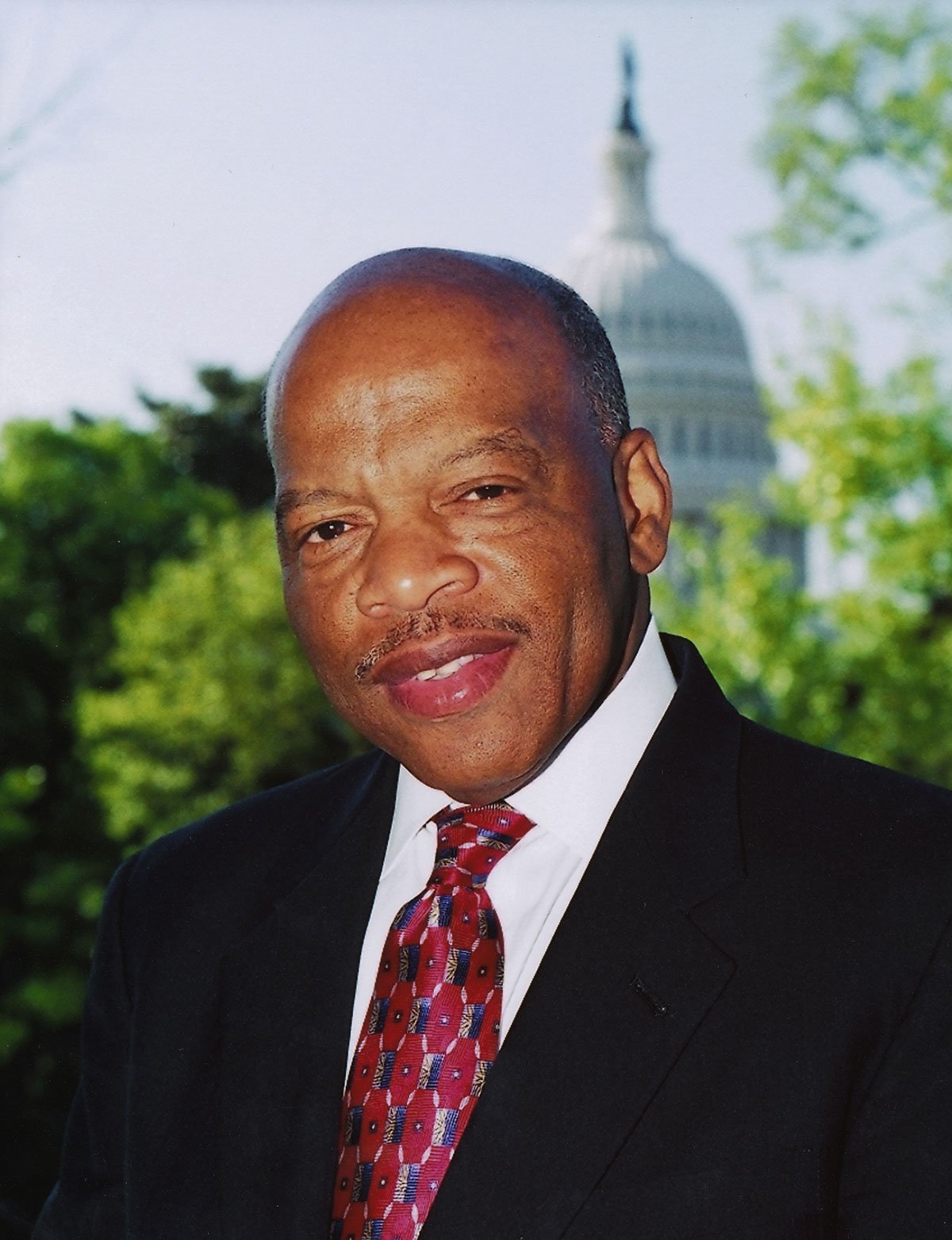 We were beaten, we were tear-gassed. I thought I was going to die on this bridge. But somehow and some way, God almighty helped me here. We cannot give up now. We cannot give in. We must keep the faith, keep our eyes on the prize. – John Lewis

The Horn in The Corn

Juneteenth celebrates June 19, 1865 – the day the slaves in Galveston, Texas finally received word of their freedom. 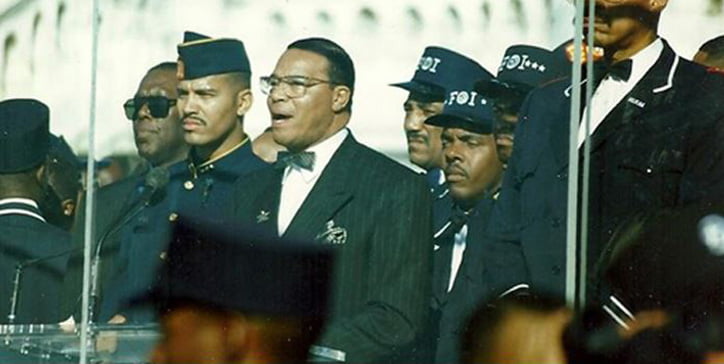 October 16, 1995 – touched on historical and social justice issues facing America and urged the men in attendance to take a pledge to love each other as brothers and to improve the conditions of their communities. 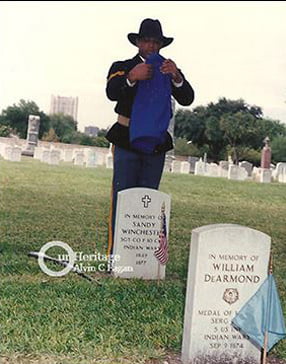 Sergeant De Armond was cited for “Heroism and Gallantry in Action” and awarded the Medal of Honor posthumously for his service during the Indian Wars. He was assigned to a supply train that was attacked by a large Indian War party as it emerged from a canyon on the Upper Washita River. The supply train was taking desperately needed supplies to General Miles and his 650-man force. Though vastly out numbered, Sergeant De Armond and his fellow soldiers fought valliantly and suffered many casualties over the 3-day loany battle that ensued.

Sergeant William De Armond was 36 years onld when he gave his life in service to our country. He is interred at the San Antonio national Cemetery. 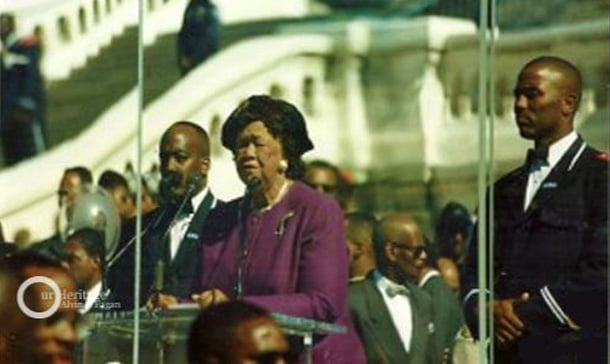 Icon of an era that changed the way America saw and treated its citizens of African heritage. 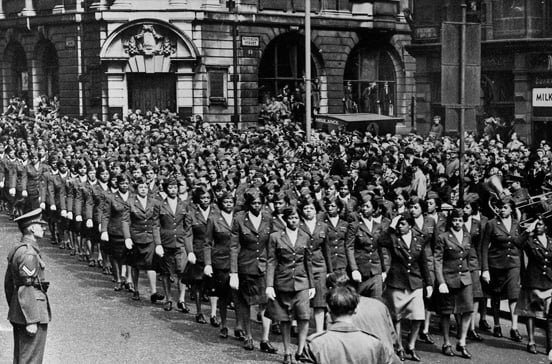 The 6888 was the first all-female battlion to be shipped over seas into a combat zone. They stepped off the ship in the midst of an air raid when they arrived in the European Theater of Operations in 1945. 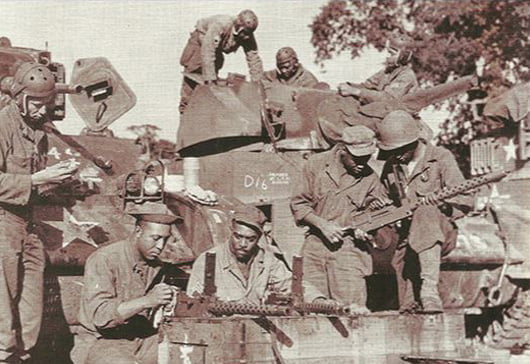 The 761st was awarded 11 Silver Stars, 70  Bronze Stars (4 with Clusters), 296 Purple Hearts (8 with Clusters), 4 Campaign Battle Stars, 3 Certificates of Merit, and 8 Battlefield Commissions. The Presidential Unit Citation for Extraordinary Heroism was later awarded to the 761st Tank Battalion in 1978.

A Debt of Honor

There were 433 Medals of Honor awarded by all brances of the military during WWII, but not a single one went to any of the blacks that served in it until over 50 years later. The reason was racism. Finally, in 1997 President Clinton awarded the Medal of Honor to Lt. Vernon Baker, age 77. He was the only one, of just 7 total black WWII Medal of Honor recepients still living. The other 6 received theirs posthumously that day, including the 761st Bn. SSgt. Ruben Rivers. 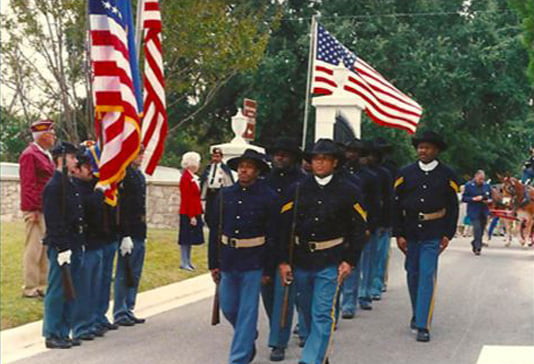 Ft. Concho’s Living History Group of Buffalo Soldiers recreates Company A of the 10th Cavalry, an all-black regiment that protected the Southwest and Great Plains in the 19th Century. Tradition says that the Comanche gave the Buffalo Soldiers their name.

The rich heritage we share as African Americans has the power to uplift us as a people—to fill us with pride in the role we have played in building this great nation. With all ages and races taking to the streets to demand meaningful action from our elected leaders to address the threats of economic disparity, incarceration, and police brutality against the black community, it is the perfect time to remember and honor the lessons of those who came before us in the struggle for equal rights.

This is why we are excited to announce the relaunch of Our Heritage Magazine Online. The website represents an exciting step away from the confines of a printed magazine, into the digital universe where we can engage a wider audience with our inspiring and informative content about black men and women. Our online magazine will spotlight African-American leaders from all walks of life and bring you stories from Main Street America—plus keep you up-to-date on the current events that are playing out in those very streets.

We are committed to using our pages to empower and enable 21st century black Americans—to promote your dreams of hope, progress and fair play—and uplift a community embroiled in crisis. Together we can and must continue to push for fairness and true equality in America. I invite you to join the conversation as we at Our Heritage Magazine Online STAND UP and SPEAK UP about our shared past and demand a future without discrimination. 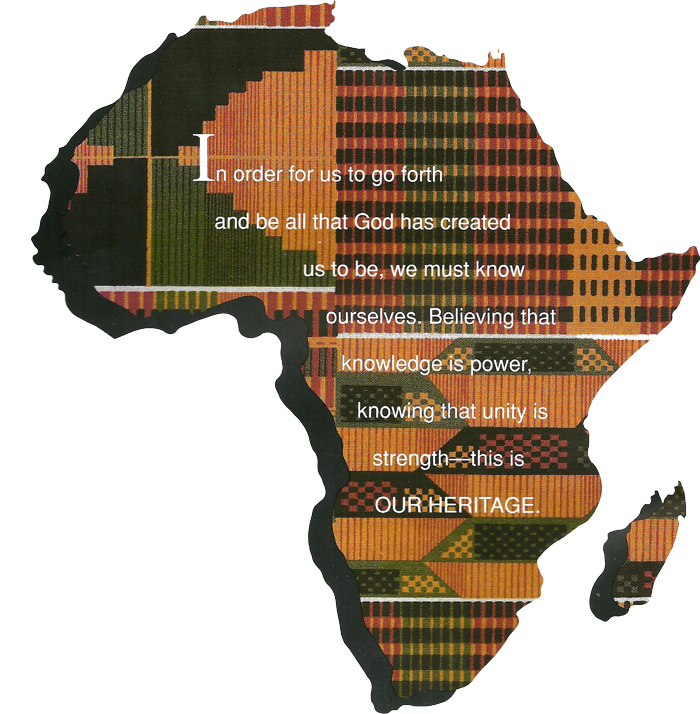 The Kente Cloth (the patterned material that forms this continent is an example) was worn by kings and is still considered to be sacred and precious to the Akan people of Ghana and is called “Nwentoma” which means “woven cloth.” To this day, it is still hand woven in Ghana and other African countries where Akan people live and perpetuate the tradition of the beautiful and sacred “Kente Cloth.”

Be the
FIRST to Know!

Receive email notifications when new content is added to the site. 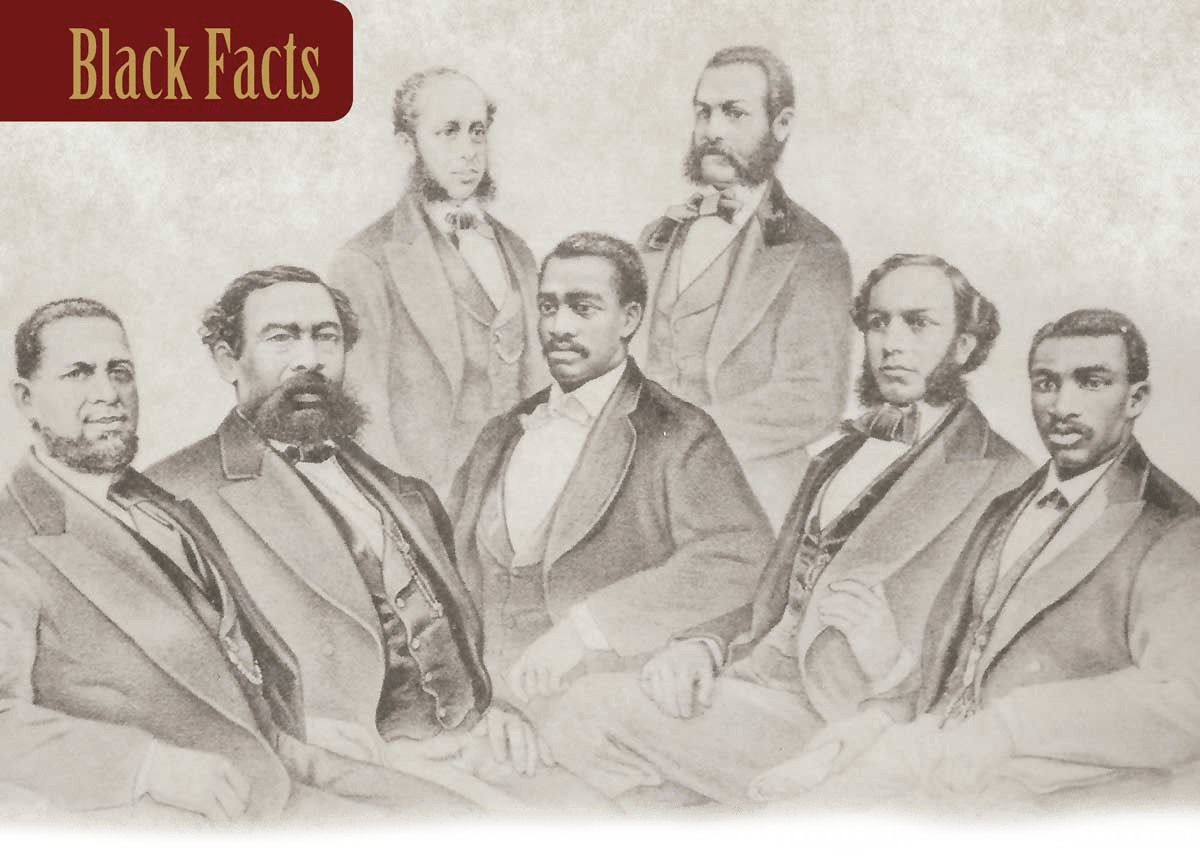 Black Congressman During the Reconstruction Era

Black Congressman During the Reconstruction Era

The Great Migration was the movement of 6 million African Americans out of southern states to northeast, mid-west and west from 1910-1970.

More than a decade into the 21st century there is still work to be done. Black America is still confronted with issues today such as discrimination, policies of exclusion, and disparity in income and access to healthcare and education. As long as there are ” so few with so much” vs ” so many with so little” there is a need for us to support one another and for OUR voice to be heard. 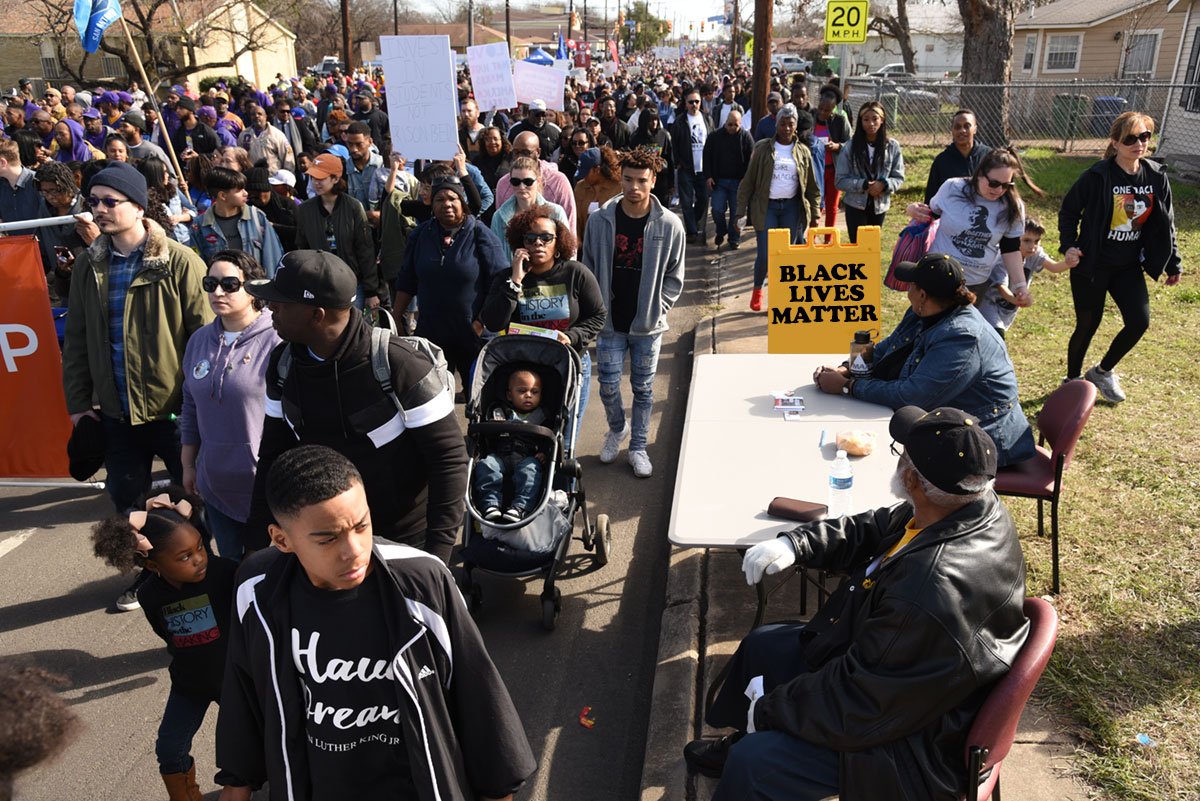