The Forgotten Battalion of WWII 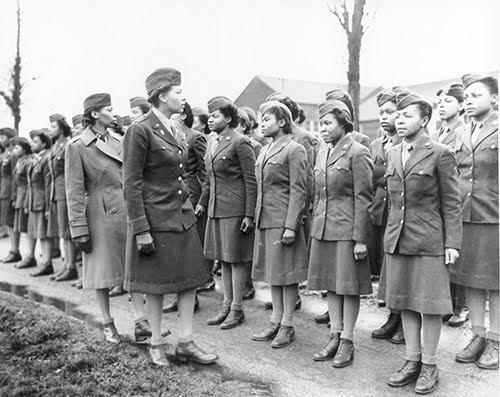 For the most part we, here in America, take the daily delivery of mail for granted.  It is a pretty sure bet that if you drop a piece of first-class mail in the box at the local post office, it will make it to its destination, anywhere coast-to-coast in the USA, within three to four days tops.  For our military men and women deployed overseas, however, mail is a highly valued and much awaited item that, even with today’s automated systems, can take weeks or more to catch up with them.  When mail call comes there are anxious soldiers waiting for that “letter from home” with the latest pictures and stories of the loved ones they have left behind.

Never are these letters and care packages from home more valuable and vital to morale than when our soldiers are in harm’s way in hostile situations.  This is also when it is the hardest to deliver due to a number of factors including frequent troop movements and limited supply chains and carriers.  This was exactly the situation that our troops were in during the winter of 1945 in WWII.  As they made their way across Western Europe and into Germany’s homeland, a tremendous backlog of undelivered mail built up and the morale of the sleep deprived and battle-weary soldiers was sinking.  Facing a severe shortage of manpower and growing pressure to give African American women a more active role in the war, the Army made an unprecedented decision and the Women’s Army Corps (WAC) 6888th Central Postal Directory Battalion (The Six Triple Eight) was formed.

The “6888” was the first and only all-women battalion to be deployed overseas.  They faced threatening conditions soon after they set sail for Europe.  On their two-week trek across the Atlantic Ocean, they survived brushes with German U-boats that were close enough that their ship was forced to maneuver so sharply that it sent pots and pans clanging down to the floor.  Then, upon their arrival in Glasgow, Scotland on February 14, 1945, they were greeted by a German V-1 rocket, known as a Buzz Bomb, which sent them running for shelter across the slippery snow-covered ground.  After their eventful arrival, they immediately boarded a train and headed to Birmingham, England.

The first few days of their assignment in Europe were a whirlwind.  Once the exhausted women arrived in England there was no time for relaxing and settling in.  They were hurriedly assigned to their quarters and directed to their posts.  Just three short days after stepping foot on dry ground, they had already marched through the streets of Birmingham in perfect formation, prepared for and been inspected by a general, and worked at least two shifts each.

Their assignment was to sort and redirect the delivery of the millions of backlogged letters and packages that had all but ceased to be delivered before their arrival.  Some of the mail had already been delayed by as much as two years.  The women immediately saw the need for a better process and went to work developing a new system that would break the bottleneck and get the stacks of mail that were packed to the ceiling in three air hangars delivered as quickly as possible.  In order to do this, they would need to create and maintain current information cards for each of more than 7 million United States Army, Navy, Air Force, civilian and Red Cross personnel in the European Theater of Operation (ETO).  Because of troop and personnel movements, many of the cards had to be updated several times a month.  To make matters even more challenging, many of the letters lacked proper addresses.  It was not uncommon for a letter to be addressed, “Junior, US Army.”  Even when they were addressed with full names, it was far from easy.  According to military records, there were approximately 7,500 “Robert Smiths” in the ETO, and each one had to be identified with a serial number, tracked and kept straight. 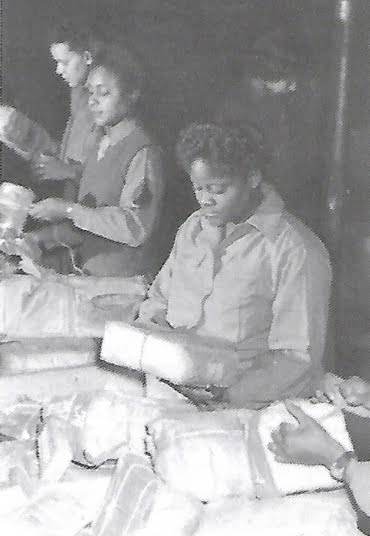 Their working conditions in the converted hangars did not make it any easier.  The windows were blacked out to prevent detection and targeting during nighttime enemy air raids.  This meant no light from what little sun shone through the dismal winter skies during the day and contributed to very low lighting conditions, which made eyestrain a constant nuisance.  Heat in the warehouses was practically nonexistent during what was an unusually cold winter, even for England.  This meant the women were wearing long johns and whatever else they could manage to fit under their coats, just to stave off the numbing cold.

Then there were the daily challenges of “dual segregation.”  They were segregated both as women and as African Americans.  The women of the “6888” were not allowed to sleep, shower or eat in the same facilities as the other female personnel and soldiers.  They were housed in what had previously been a boarding school and while most of the “6888” were designated postal clerks, due to segregation, some of the women took on service and support positions—operating their own mess hall, make-shift hair salon, motor pool and supply rooms—making the 6888th almost entirely self-sufficient.

Despite these challenges, the “6888” worked tenaciously around the clock.  There were 3 eight-hour shifts per day, seven days a week.  Their task was daunting, but they knew that for the soldiers in the field, letters from loved ones brought important personal connections that kept morale high.  Each shift averaged 65,000 pieces of mail going out for delivery to soldiers across Europe.  The women took great satisfaction in knowing that they were able to improve the quality of life and provide some semblance of comfort to the millions of soldiers that were so far from home.

When they had been assigned to Birmingham, it was supposed to be a six-month assignment.  However, they completed their assignment in half that time.  In May of 1945, just three months after arriving in Europe, they had done the impossible and cleared the backlog.  Their efforts were so successful that they were reassigned to Rouen, France, to get the mail moving there.

The treatment and living conditions in Rouen, and later during their final assignment in Paris, was quite different than what they had experienced in England.  The task was still difficult, the work schedule still relentless, the segregation ever-present, but the overall living conditions were better than what many of the women had experienced at home.  While in France they were housed in a luxurious hotel with maids to clean their rooms and chefs to prepare their meals.  No more cold, drafty mess halls, and the “meat of the day” was no longer Spam.

While in France, they were invited to participate in the parade held in Rouen’s Place du Vieux- Marché, the historical place where Joan of Arc died.  Even the parade was different.  While they marched through the streets of Birmingham, England, it had been amid curious onlookers and the watchful eye of inspecting officers dissecting their every step.  In France, they were part of a celebration.  People were happy and cheering and calling out good wishes for them.  In spite of the heavy workload, for many of the women their time here would truly be “the time of their lives.”

It once again took the women only three months to achieve the same staggering results in Rouen, France that they had in Birmingham, England.  From Rouen they were sent to Paris, an assignment which would turn out to be their last when the war ended a short time later.  The “6888” was immediately shipped back home to Fort Dix, New Jersey, having performed above and beyond expectations.  Out of the 855 members of the battalion, three lost their lives during the war.  Those honorable women were laid to rest in France.

Upon the 6888th Battalion’s arrival home, there were no parades or reporters swarming them with questions or taking photos.  There were no cheering crowds to welcome them and congratulate them on a job well done.  Instead, the 6888th Central Postal Directory Battalion was quietly disbanded without fanfare and the women dispersed.  Some continued to serve in the military, but most retired and went home with their story largely untold, their sacrifices unrecognized, and their successes uncelebrated.

Sixty-four long years later, in February of 2009, a U.S. Army support group called the Freedom Team Salute held a ceremony at the Women’s Memorial at Arlington National Cemetery to honor the women of the 6888th Central Postal Directory Battalion.  Of the 855 women who comprised the “6888,” only three survivors could be located and brought to the ceremony.

“For the morale of Soldiers in war time, only one thing counts more than somewhere to sleep or something to eat.  That one thing is mail from home—holiday greetings, photographs, regular letters, and packages filled with items from relatives and friends.  The 6888th Battalion broke all records for redistribution of mail to front line troops in the European theatre.

“Honoring the women of the 6888th Central Postal Directory Battalion with Commendation is long overdue.  These were strong women who faced prejudice in the United States, but still managed to complete their mission, putting their Country ahead of their own trials.  They did not have the luxury of working with automation equipment to help them organize, sort and distribute the millions of letters and packages that had accumulated in airplane hangars and other places in Europe.  They are a true American story that needs to be told.”

We here at Our Heritage Magazine Online agree.  Their story is one that needs to be told so that we may remember these women for the courage, tenacity and perseverance that led them to achieve so much in so short a time.

Visit the museum’s webpage at www.awm.lee.army.mil/

Special thanks to Debra Jones for collecting photographs and other efforts to help make this tribute possible.