The Black Wall Street Of America 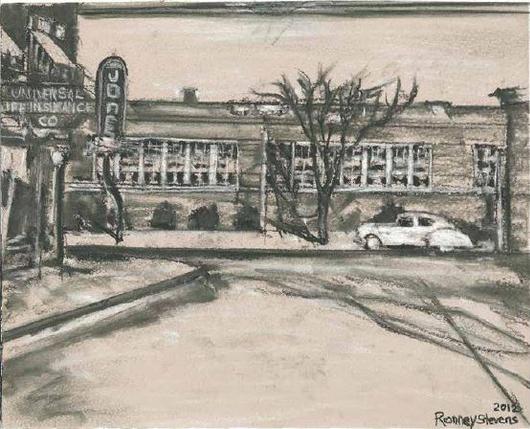 Greenwood, OK was founded by O.W. Gurley, a black entrepreneur and landowner from Arkansas who moved from Perry, OK in 1906 to Tulsa and settled on land “to be purchased by Coloreds only.” He built a boarding house next to the Frisco Tracks, naming the dusty trail in front of it Greenwood Ave. Many blacks, fleeing the South and looking for a new life stayed there while finding jobs and land for a new home. He set up the “boundaries” of Greenwood, which are still well-known today: Pine Street to the North (Greenwood Ave turns into Garrison St. at Pine St); Archer St and the Frisco tracks to the South; Cincinnati St on the West; and Lansing St on the East. Gurley purchased and built numerous other buildings, all of which were lost in the 1921 Race Riot.

Black Wall Street was built on the backs of men like Simon Berry, an experienced pilot and astute businessman, who started the city’s first transportation system, Berry’s Jitney Service. Adding buses and chartered airplanes, Berry became one of the largest employers of blacks and, after the sale of his business, his uniformed drivers became a symbol of racial progress. He continued to make his mark well into the 20th century, even after the Race Riot of 1921 destroyed everything he owned. He was honored with a plaque and a tree in his memory at the Black Wall Street Memorial.

Another “founding father” of “The Black Wall Street” was James Henri Goodwin. With just a 4th grade education, he moved to Tulsa, encouraged by O.W. Gurley’s promotion of the Oklahoma “Promised Land.” Beginning as a variety store clerk, he eventually became the youngest entrepreneur on The Black Wall Street of America with interest in many businesses, including ownership of the oldest continuing business enterprise in North Tulsa, Jackson Undertaking Co., as well as The Oklahoma Eagle Newspaper, the 2nd oldest continuing business. He became an attorney after age 50 and was instrumental in saving the last few structures left on Greenwood Ave; he and his son are honored in the Greenwood Cultural Center as “illustrious examples of the best tradition of the Black Wall Street’s pioneering souls.”

A Black Day on Black Wall Street began like any other, until a white mob arrived at the courthouse demanding the neck of a black man falsely accused of assaulting a white woman in an elevator. Post-Civil War America had become a battleground between blacks and whites with the main weapon in the South and many other areas being the noose. Lynchings were common and became the single largest category of unsolved murders in the U.S. Many Blacks were lynched after being falsely accused of crimes ranging from stealing property to assault. It was a blight on American Society as mobs seeking their own brand of justice seemed to have free reign. The heated confrontation at the courthouse that day pitted two prominent black businessmen and a newspaper publisher against a huge mob preparing to assault the jailhouse. As attempts were made to quell the rising anger of the mob, a gun was drawn and fired and thus began the destruction of The Black Wall Street. It was horrendous as Greenwood Ave was reduced to a killing field surrounded by burning homes and businesses, many set afire by a well-planned aerial assault of planes dropping nitroglycerine canisters to destroy the black community.

One of the two businessmen involved in the incident at the courthouse was J.B. Stradford, the son of a runaway slave, who purchased his freedom from his master and settled in Tulsa, OK. He had become the first black attorney in the Territory and was defending the accused man being held in jail that day. Ironically, he and others who tried to avoid the trouble were indicted for inciting a riot, and several of them eventually became fugitives. Stradford was rescued by his son, and he lived with him for years in Chicago; he was ultimately pardoned by Governor Frank Keating, who also apologized to his family.

The Oklahoma National Guard saved what day was left, but it is thought by many that they could have saved more lives and property had they arrived and been able to take over sooner. The local law enforcement and guard units were later accused of joining with the white rioters who were rousting out blacks from hiding. While some white residents gave refuge to some blacks fleeing for their lives, most were sent to concentration camps for their own safety, but some were killed even while surrendering. 25,000 strong, the rioting white army destroyed the best that the Black community of Tulsa had to offer — the best and brightest businessmen, as well as the most successful and lucrative enterprises in the city.

It was a Black Day all around as the souls of many people, black and white, were blackened by hatred, the buildings and property of the people of North Tulsa were left in black, charred ruins, and the bright Oklahoma sky was blackened with the smoke of fires lit by the blackness of the human spirit – racism.

Greenwood Avenue, known as The Black Wall Street, was almost completely destroyed that day in 1921, ultimately leaving only one structure standing, the Mackey House, built and owned by Sam and Lucy Mackey, and now operated as a museum by the Greenwood Cultural Center located next door. It stands in its new location as a testament to the indomitable spirit of the Black Community of North Tulsa, as well as to the indestructible spirit of Black America. 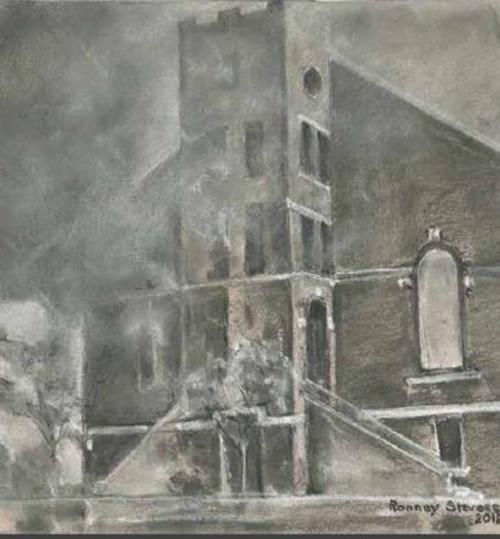 Sam & Lucy Mackey built a white two-story framed home for $5,000 at 322 North Greenwood Avenue. When their family home was destroyed in the race riot of 1921, the Mackey’s rebuilt their home – a two-story, handsomely furnished brick house that became the center of Greenwood’s social life and ultimately the last surviving structure of the original Black Wall Street of America.

Replicated brick by brick at a cost $375,000, the Prince-Mackey Home was renamed by its restorers. Now known as the Mabel B Little Heritage House, it was expanded in 1995 to the Greenwood Cultural Center, which was dedicated on October 19th, 1995, honoring “pioneers whose resilience sparked the area’s regeneration after the 1921 race war. In the aftermath of the destruction, rising from the ashes, Greenwood Avenue reclaimed its glory as The Black Wall Street of America.”

After being destroyed by hatred and greed, Greenwood experienced a renaissance as black-owned businesses once again flourished on Greenwood Avenue. In 1941, the Greenwood Chamber of Commerce described it thus: “Today, after some twenty-five years of steady growth and development, Greenwood is something more than an avenue – it is an institution. The people of Tulsa have come to regard it as a symbol of racial prominence and progress – not only for the restricted area of the street itself, but for the Negro section of Tulsa as a whole.” Far from dead, Greenwood Avenue was touted as “unquestionably the greatest assembly of Negro shops and stores to be found anywhere in America.”

This success continued for more than a decade. According to one youngster, given the grand tour in 1953 by his stepfather, “One red brick building after another was linked together by neon signs and sidewalks crowded with people.” He remembers the many drugstores, theaters, billiard parlors, grocery stores, restaurants, churches, variety stores, and hotels, “All owned by Coloreds,” his stepfather proudly announced.

The historic area had survived the Great Depression, World War II, the Korean Conflict, but in following years, the area deteriorated until the last business left was the Oklahoma Eagle, owned by E.L. Goodwin. Taking an option to purchase the great avenue’s final remnants from the City of Tulsa, he was instrumental in saving the last few buildings, which were renovated in the late 1970’s. By the early 1990’s, many of the pioneers and older residents of Greenwood, faced with the loss of their legacy, met with supportive civil rights activists and city officials to recall the tragic lost fortunes of their people and the hopeful resurgence of the greatness and heritage of The Black Wall Street.

According to Cultural Center records, “Members of the group expressed the need to have something left in their memory for the generations of children who will live under the shadows cast and the indelible scars from the riot. The meeting led to the preservation of the Prince-Mackey House and its expansion into the Greenwood Cultural Center. This facility is dedicated to all children of Tulsa, to the pioneers and entrepreneurs who made The Black Wall Street of America a vibrant boulevard, and to the generations to come.”