Executive Director, Center for Women Veterans
Office of the Secretary

Jacquelyn Hayes-Byrd serves as primary advisor to the Secretary on Department policies, programs, and legislation that affect women Veterans. In addition, she oversees the Center’s activities, which include monitoring and coordinating VA’s administration of health care, benefits services, and programs for women Veterans; serving as an advocate for cultural transformation (both within VA and in the general public) in recognizing the service and contributions of women Veterans and servicemembers; and raising awareness of the responsibility to treat women Veterans with dignity and respect. Ms. Hayes-Byrd brings with her experiences in Management, Operations, and Administration and Human Resources. She completed a successful career in the U.S. Air Force, rising to the rank of Major as an Education and Training Officer supporting the needs of thousands of U.S. Air Force enlisted airmen and officers. Ms. Hayes-Byrd has built a career of service both in and out of uniform. Because of her skills, attention to detail and 30 plus years of experience, she was asked to perform in leadership positions at the state level in the administration of the first female governor of the state of New Jersey and at federal government levels for three U.S. Presidents in The White House, the U.S. Department of State and the U.S. Department of Commerce. She has also provided leadership in both private and not-for-profit agencies.

Jacquie is a member of both the Alpha Kappa Alpha Sorority, Inc. and Leadership Greater Washington Class of 2009. 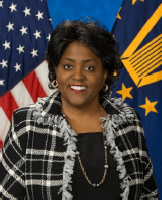