Deputy Director, Center for Women Veterans
Office of the Secretary

Elizabeth Estabrooks leads development and implementation of new initiatives that support and enhance the Center for Women Veteran’s mission and vision. She mirror’s the Executive Director’s goals and vision
to advocate for cultural transformation both within and outside the VA to recognize the service and contributions of women Veterans and servicemembers and raise awareness of the responsibility to treat women Veterans with dignity and respect. Elizabeth is team lead for staff supervision, development, and creative performance, as well as organizational and strategic planning that will continue to move the Center for Women Veterans forward in successfully meeting their goals.

Elizabeth is a Cold War Veteran of the United States Army, serving at Harvey Barracks in Kitzingen, Germany from 1978 – 1980. 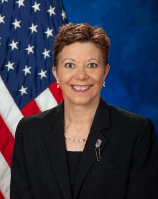