Chairman of the Board of Veterans’ Appeal (Board)

Cheryl L. Mason was nominated by President Donald J. Trump to serve as the Chairman of the Board of Veterans’ Appeals and confirmed by the United States Senate on November 8, 2017. Chairman Mason was sworn into office on December 3, 2017.

As Chairman of the Board of Veterans’ Appeals (Board), Ms. Mason leads a team of approximately 1200 personnel including Veterans Law Judges, attorneys and operations and administrative professionals to meet the Board’s mission of conducting hearings and deciding appeals for Veterans and their families. Ms. Mason is accountable for the efficient and effective management of Board resources and executing a budget in excess of $190 million. The Board is the Secretary’s designee to decide appeals arising from the Office of General Counsel and all three administrations: Veterans Benefits Administration, Veterans Health Administration, and National Cemetery Administration.

Prior to assuming her current role, Ms. Mason served as Interim Principal Deputy Vice Chairman, Deputy Vice Chairman, Chief Veterans Law Judge, Veterans Law Judge, and Counsel at the Board as well as an attorney with the Federal Labor Relations Authority and as a Department of the Air Force civilian at HQ United States Air Forces in Europe at Ramstein Air Base, Germany. Ms. Mason also served as an instructor at Central Texas College in Germany.

Ms. Mason is the spouse of an Air Force veteran, married to a Lieutenant Colonel, USAF (retired), and is the daughter of a World War II Navy Veteran who died by suicide. In 2020, Chairman Mason was named a PREVENTS Ambassador, and works to help change the culture surrounding mental health and suicide, not just for Veterans, but for everyone. Chairman Mason also is a key leader in the military spouse employment initiative, working to share best practices across enterprises to increase the hiring and retention of military spouses in the federal government.Originally from Portsmouth, Ohio, Ms. Mason received her B.A. with Distinction in Political Science and Psychology from Ohio Northern University and her J.D. from Creighton University School of Law. Ms. Mason began her legal career in private practice in Omaha, Nebraska. 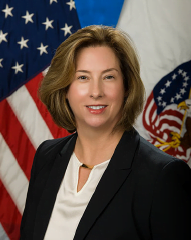